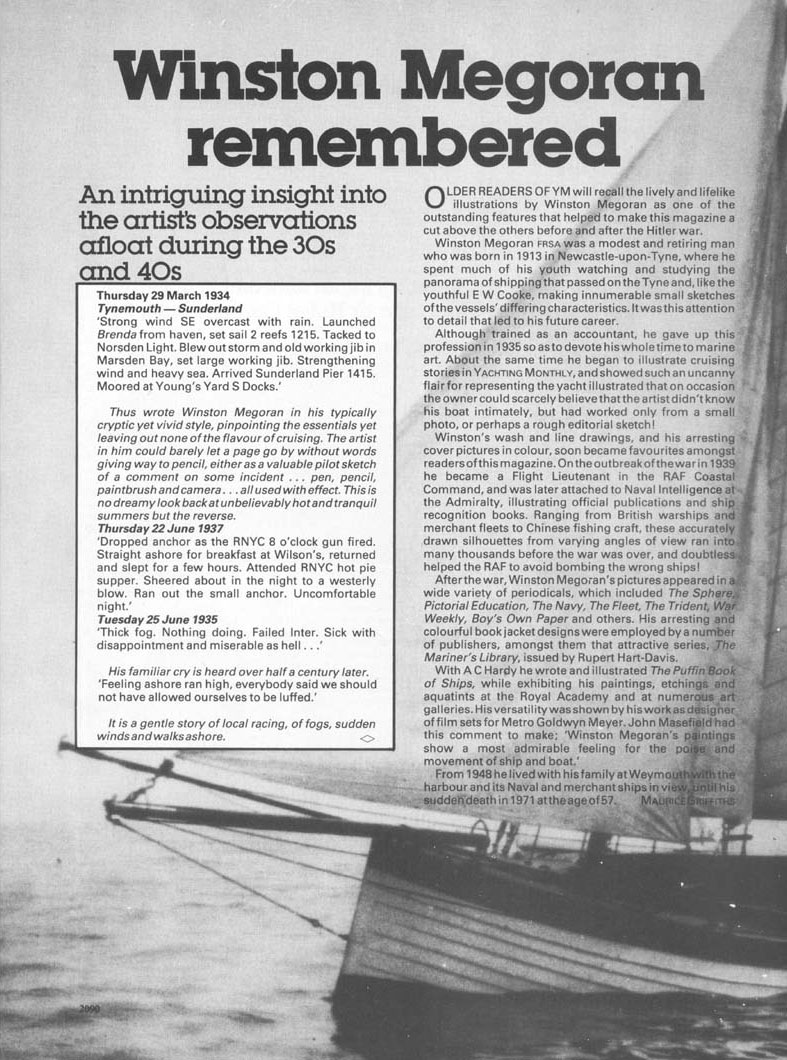 Older readers of the Yachting Monthly will recall the lively and lifelike illustrations by Winston Megoran as one of the outstanding features that helped to make this magazine a cut above the mothers both before and after the Hitler war.

Winston Megoran FRSA was a modest and retiring man who was born in 1913 in Newcastle-Upon-Tyne, where he spent much of his youth watching and studying the panorama of shipping that passed on the Tyne and, like the youthful E W Cooke, making innumerable small sketches of the vessels' different characteristics. It was this attention to detail which led to his future career.

Although trained as an accountant he left this profession in 1935, at the age of 23, to devote his whole life to marine art. About the same time he started to illustrate cruising stories in Yachting Monthly and showed such an uncanny flair for representing the yacht illustrated that on occasion the owner could scarcely believe that the artists didn't know his boat intimately but had worked only from a small photo or perhaps a rough editorial sketch!

Winston's wash and line drawings were, and his arresting cover pictures in colour, soon became favourites amongst readers of this magazine. At the outbreak of war in 1939 he became a Flight Lieutenant in the RAF Coastal Command, and was later attached to Naval Intelligence at the at the Admiralty, illustrating official publications and ship recognition books. Ranging from British warships and merchant fleets to Chinese fishing craft, these accurately drawn silhouettes from varying angles of view ran into many thousands before the war was over, and doubtless helped the RAF avoid bombing the wrong ships!

After the war Winston Megoran's pictures appeared in a wide variety of periodicals, which included The Sphere, Pictorial Education, The Navy, The Fleet, The Trident, War Weekly, Boy's Own Paper and others. His arresting and colourful book jacket designs were employed by a number of publishers, amongst them that attractive series The Mariner's Library issued by Rupert Hart-Davis.

With A C Hardy he wrote and illustrated the Puffin Book of Ships, whilst exhibiting his paintings, etchings and aquatints at the Royal Academy and at numerous art galleries. His versatility was shown by his work as a designer of film sets for Metro Goldwyn-Meyer. John Masefield had this comment to make "Winston Megoran's paintings show a most admirable feeling for the poise and movement of ship and boat."

From 1948 he lived with his family at Weymouth with the harbour and its Naval and merchant ships in view until his sudden death in 1971 at the age of fifty seven.